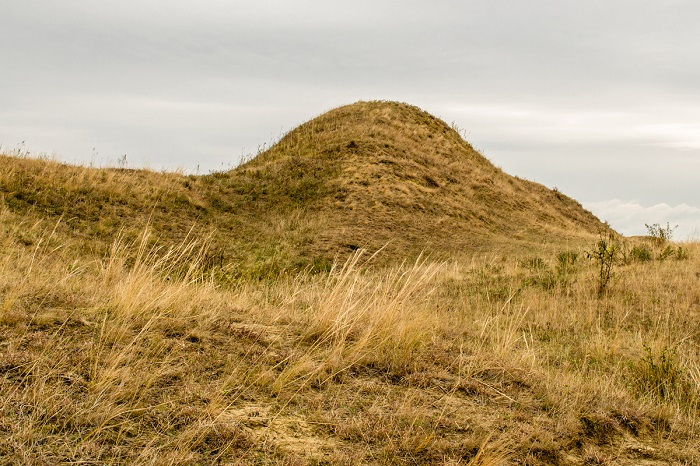 Moldova’s geography can be generalized as a forest-steppe zone – the foothills originating from the Carpathian Mountains subtly sloping towards the beginnings of the Eurasian Steppe, before fading into the sea. The land is intersected by softly flowing rivers making their way through silent forests and deep, wide valleys. These features make for a surprisingly rugged topography, creating many geological oddities. Among these are the so-called Suta de Movile, hiding its secrets.

This most curious chain of hills can be found near the wooded banks of the Pruth River, in the Rîșcani district. The small villages of Braniște and Cobani can be found at a short distance away. The suta de movile, meaning a hundred burial mounds in Romanian, stretch over a distance of approximately five miles and are characterized by rolling and plucky hills, suddenly rising out of farmland and resembling the burial mounds of Scythian and Sarmatian tribes. The area lives in a continuous solitude, home to cattle, wheat fields, as well as plum and apricot trees. This solitude is only interrupted by a small road that waves it way north and south towards the Padurea Domneasca (Princely Forest).

Considering the steppe environment of the region, as well as the peculiar shape of the hills, many legends have arisen regarding their origins. There are legends that the site was once the location of a great battle that raged between nomadic tribes, with the dead heroes subsequently having burial mounds constructed for them. The largest such mound, the Movila Țiganului standing at nearly 100 feet tall, was purported to be the burial site of a fallen Scythian chieftain.

The Moldovan voivode and man of letters, Dimitrie Cantemir mentioned the region in his work Descriptio Moldaviae. He referred to the mounds as Centum Monticuli, eluding to the legendary stories concerning the disjointed chain of hills. Indeed, they do strongly resemble the burial mounds of ancient Scythian tribes that can be found in steppe zones of Moldova and Ukraine to the east.

A relic of the Sarmatian Sea

The true story behind the origin of the Suta de Movile is not as grand as the legends detail, but they are equally as fascinating. Essentially, the region around the Pruth Valley is full of windswept geological oddities that are the result of the region once being a part of the primordial Sarmatian Sea. Some other examples of an ancient sea can be found nearby. In the village of Cobani lies a large cliff that is the remnant of a large coral reef that was once underwater. Further evidence of ancient coral reefs lies further to the south – dramatic and rugged cliffs that stretch almost as far as the Padurea Domneasca.

As for the mounds themselves – there are no great Scythian burials awaiting discovery here, only sedimentary rock. This rock originates from the flowing tides that once covered the region, moving both stone and soil. To the Sarmatian Sea there is no returning, as the rivers and seas of the world have changed course throughout the ages. However, to this day, when the rain falls, water does manage to accumulate in the valleys between the hills, reminding us that the sea once flowed here, and the mounds serve as a monument to the memory of a world that no longer exists.