Under the shadow of the Greater Caucasus Mountains, nestled in the wine-growing region of Kakheti in eastern Georgia lies the city of Sighnaghi. Overlooking the Alazani valley, the motherland of Georgian wines, this charming picturesque city is famous for its dramatic scenery, cobblestone streets, and pastel homes, becoming a popular touristic attraction in the country. Located approximately 70 miles from Tbilisi, Sighnaghi makes for an interesting day trip from the capital. 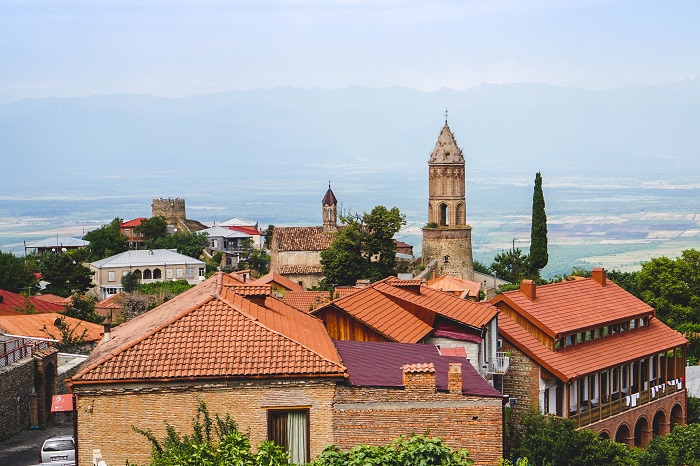 Sighnaghi became prominent during the 18th century, under the rule of King Erekle II. By this point in history, Georgia’s rich role in the Silk Road had faded into history and the country was reeling. The conquest of Constantinople by the Ottoman Turks had effectively cut off Georgia from European and Christian aid. Precariously located between the Turks and Persia, the kingdom found itself beset from both east and west. Sighnaghi was not only developed as a powerful fortress, but also as a final flowering of Georgian culture before the kingdom fell to Imperial Russia in 1802. 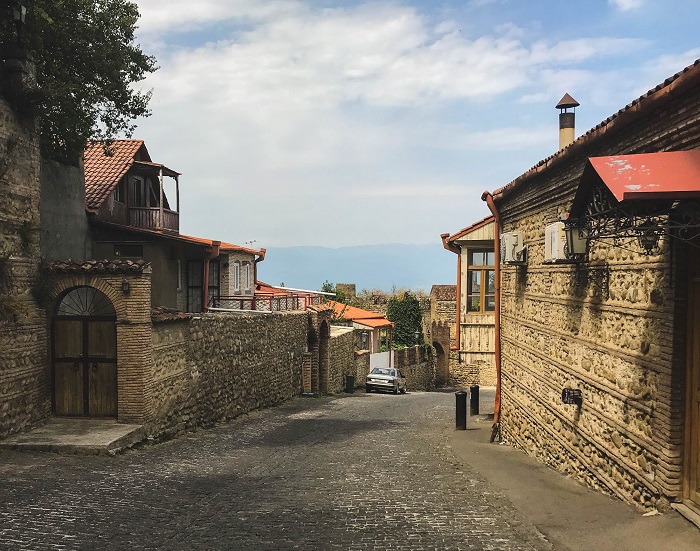 Any trip to Sighnaghi first begins with a trip to the Bodbe Monastery, found along a steep hillside only a mile outside of town. The monastery (presently a nunnery) is significant due to the fact that there lies the shrine and remains of St. Nino, bearer of the grapevine cross and Equal to the Apostles, the woman who was responsible for Georgia’s conversion to Christianity. It is said that her tomb was originally the site where she lived in her tent as she healed and preached to the Georgians. The church on site dates from as early as the fourth century, but has been remodeled and rebuilt on numerous occasions. The current structure cannot not be more than a few centuries old, if one were to date the interior Russian-influenced frescoes. The area of the monastery is decorated with flower beds and bushes, and a trail down the hill leads to a holy spring, sacred to Georgians. 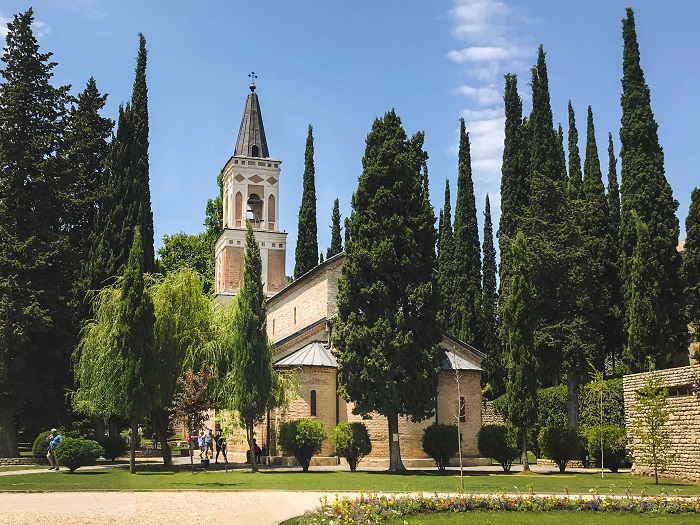 The monastery has served as a cultural and religious center for Georgians over the centuries, as the Kakhetian kings were crowned there. Numerous additions (including a bell-tower) were constructed under tsarist rule but the monastery also suffered greatly under Russian rule. It was closed down in 1837 only to be reopened in 1889. In 1924, the Bolsheviks again shut down the monastery, using it as a hospital. It finally reopened in 1991 as a nunnery. The grounds continue to evolve even today, as a second church is currently under construction next to the main church. The nunnery is inhabited by a handful of nuns, who run a shop selling icons and other handmade crafts.

Concerning the Fortress of Sighnaghi

Sighnaghi was constructed as a fortress, designed to protect eastern Georgia from incursions stemming from nearby Dragestan. Dramatically situated along the slopes of a large bluff, the walls extend for a great distance over the nearby hills, a far echo of the Great Wall in China. The wall has 23 towers, each named for a nearby town at the end of the road that passes through each of the six gates. 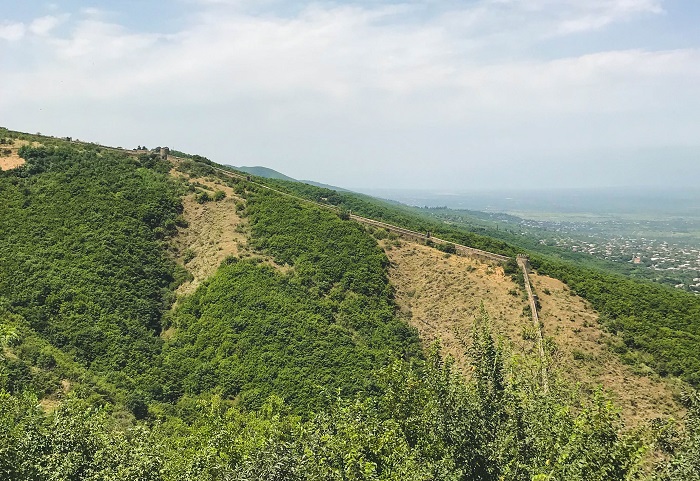 Exploring the walls took me to another time – that of the beleaguered Kakhetian king Erekle II. The impressive fortification can make for steep climbing, due to the dramatic slopes and sometimes large drops in the stairs. The walk is undeniably worth it, seeing the red and white Georgian flag fluttering in the wind, still protecting the Alazani valley two centuries after the fall of the last Georgian king. 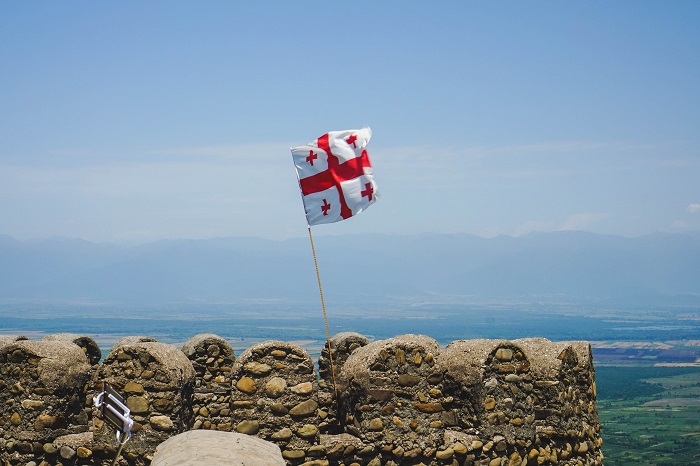 Sighnaghi itself is a town that would not be out of place in Europe. Pastel painted homes with red roofs and charming cobblestone streets brings to mind a French or Italian village. The eighteenth century buildings have wooden frame balconies, underground wine cellars, and many are home to restaurants. Indeed, while there I enjoyed a version of chicken tabaka, fried with garlic. Georgian cuisine is a wonder itself, famous throughout Eastern Europe and Central Asia. 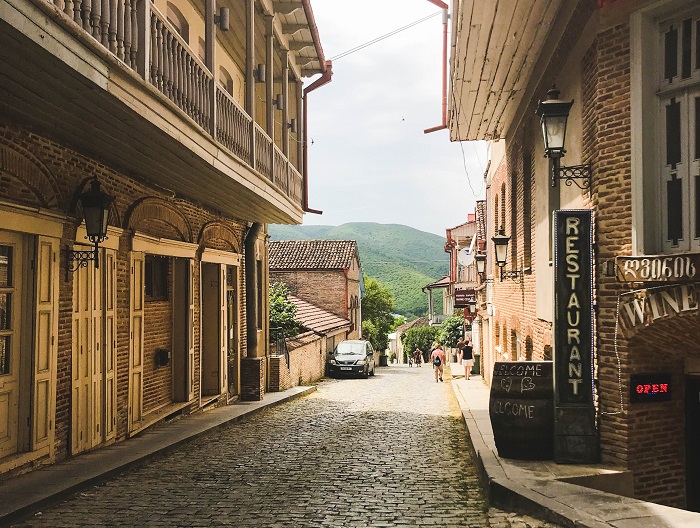 In Sighnaghi, there is a bazaar where one can sample and purchase local sundries. There are vendors selling spices from the eastern regions of the world, hinting at the trade wealth that Kakheti once enjoyed. Among breads, cheeses, and meats that one can purchase there, there are also local farmers who sell homemade wine of various quality. I use the term “various” with all due respect to the Georgians. After living so many years in Romania, I understand how homemade wine being sold in local bazaars can vary in quality. Namely, homemade wines can either be the most beautiful symphony of fermented berries one’s lips have ever met, or it can be little more than cheap alcohol mixed with low quality grape juice – essentially poison to all except for the strongest and most conditioned of stomachs. Best piece of advice – unless you know the winemaker personally, best to stick to commercial brands. Another noteworthy item that can be found in the bazaar – churchkhela, a local treat made from grape juice dried over almonds and walnuts. The rumors are true – it indeed tastes like Snickers. 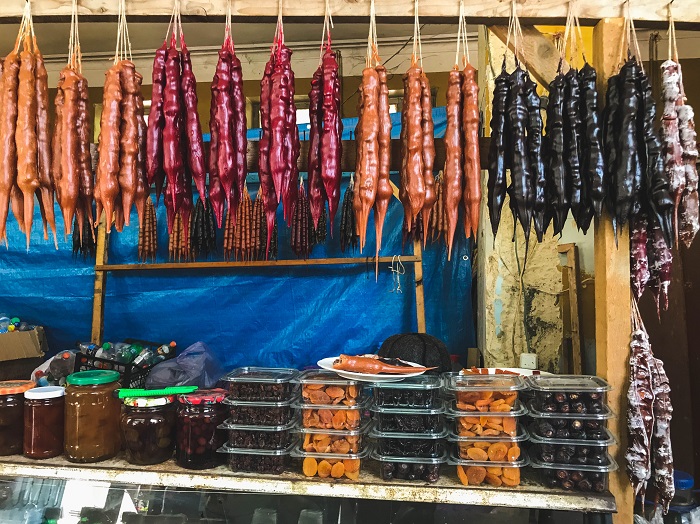 The city has a romantic appeal, leading to it being billed as the City of Love – a popular wedding destination. The local registry is open at all hours, both day and night. It is possible even for foreigners to be married there, only needing to produce a passport. Considering the location – the stunning picturesque views, the historical architecture, and the Georgian penance for hospitality, good food and drink, there are far worse places for couples to celebrate their unions.

Endowed with important historical and cultural heritage sites, Sighnaghi is the jewel of the Kakheti region. Designed and developed as a late attempt to stave off foreign invasion, the city has become a living breathing museum of Georgian culture. In recent years, it has become an important touristic attraction in the region. Any traveler exploring eastern Georgia and desiring to immerse himself in Georgian winemaking tradition can look to Sighnaghi has an excellent starting point, and through so – become ever closer towards the country’s soul. 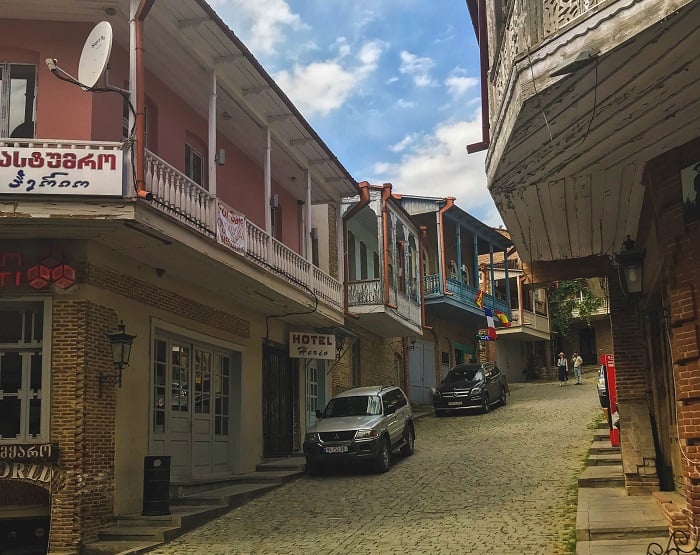