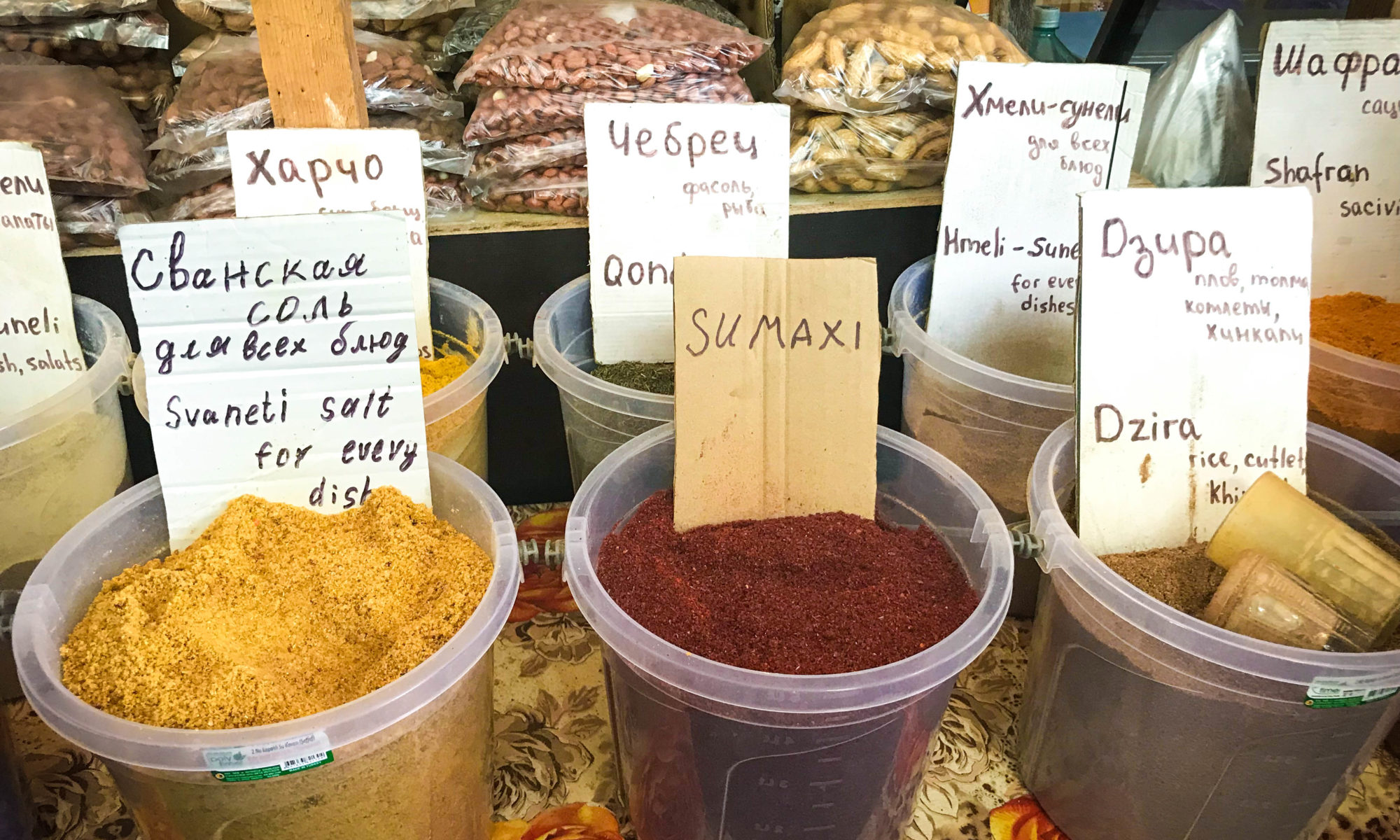 During my travels in Georgia, I had the joy of partaking in dishes of the Georgian people. Of course, it is well known that Georgian restaurants are very popular in Kiev, Odessa, Yerevan, and other cities of the former Soviet Union, however saying that I understand Georgian cuisine after eating a shashlik is like saying that I know American cuisine after eating burgers with camembert cheese in an Angers restaurant. Therefore reader, let this be an introduction to the cuisine of the Georgians, such as I have experienced in Tbilisi, Sighnaghi, and other places.

At first glance, it is clear that Georgian cuisine is descended from the same influences that gave birth to Romanian cuisine. The cuisines of both peoples are characterized as heavy, meaty, and relying heavily on breads and soups – pointing to the physical needs of living in the mountainous regions of the Caucasus and Carpathians respectfully. It is here, however, that the similarities end. The temperate flavors (centered around garlic) heavily utilized by Romanians are reflective of its location between Central and Eastern Europe, while Georgia lies on the historic routes of the Silk Road, linking Europe and Asia. Therefore, spices can be found in all bazaars, and are utilized to a great degree. The most famous Georgian spice is adjika, a hot and spicy but subtly flavored dip that is used to flavor food. The name literally means “red salt,” and it is made from hot red peppers, garlic, herbs, fenugreek, salt and walnut. It can be made as a salt (hence the name), or even as a tomato-based paste.

Georgia is famous for its breads – the most famous being khachapuri. The name literally means “cheese bread” as the bread is leavened and rises until it takes the shape of a boat, with the inside being filled with a type of cheese called sulguni. It is also possible to include eggs, meat, or peppers in the inside of the boat, which can create a pizza of sorts. Do take note that there are also other forms of khachapuri, native to other regions of the country, but I have not encountered them. 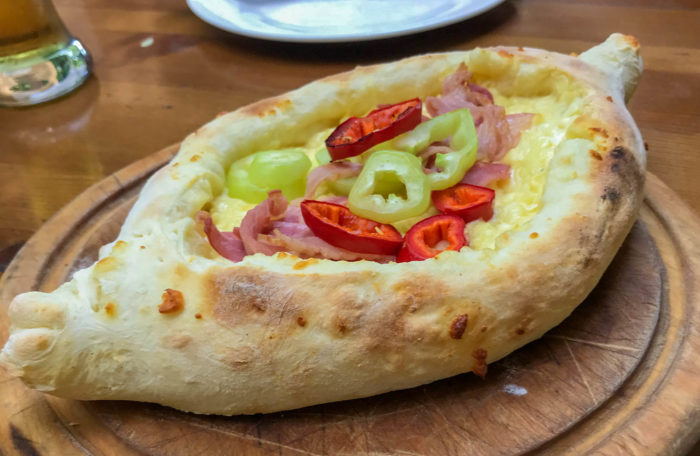 There is also the shotis puri, which is a bit like a baguette in taste, but has the shape of a long canoe. The special shape is attributed to being the bread that soldiers would carry with them while marching to the many battles that have ravaged Georgia over the centuries. This bread is baked in an oven called tone, which is analogous to the Armenian tonir, and the more famous tandoor of India. Essentially, the tone looks like the top of a clay pot, with a fire at the bottom, which heats the sides. The dough is then sectioned off, placed on the sides of the pot, and baked until done.

Among vegetables, I have tried kitris, which is a nice refreshing salad during hot summer days. It is somewhat similar to the Greek choriatiki, marrying cucumbers, tomatoes, and onions together. Walnuts are also added, providing a wonderful earthy flavor. Tolma is another dish that may be familiar to the reader. This is because it can be found throughout the Balkans, Anatolia, and into the Caucasus under various names. It is a dish of minced meat wrapped in grape leaves, and refreshingly topped with a garlic-based sauce.

Georgians love to eat meat, with chicken, beef, pork, and lamb being utilized. I have noticed a plethora of cows grazing along the slopes of the Carpathians. However, they are far skinnier than American cows, and I wonder if they are used far more for milk and dairy production than meat. In any regard, the famous shashlik is actually referred to Georgians as mtsvadi. There are no onions, tomatoes, or bell peppers included, as in the Romanian frigărui – simply marinated meat. 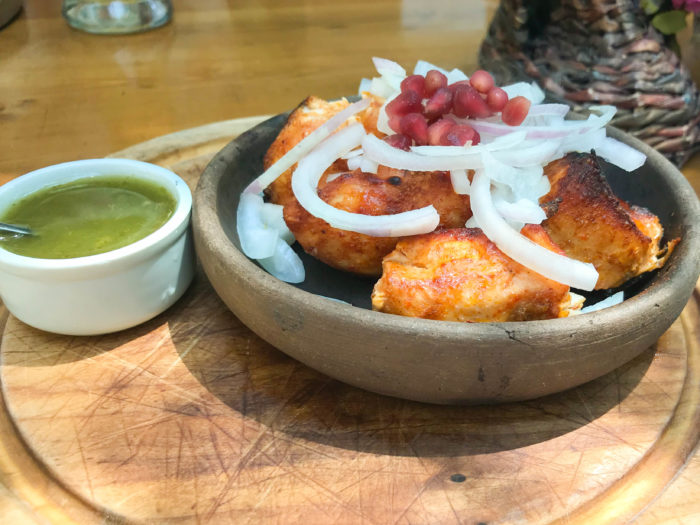 Tabaka is another popular dish – a whole chicken that is butterflied and fried and served inside a clay pot. The skin results in the crunchiest taste that I have experienced since eating the fried chicken of the American South. 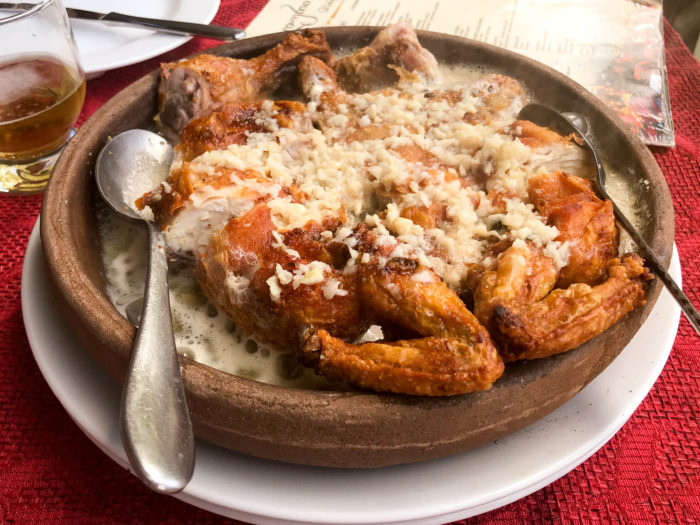 The dish that I enjoyed the most is the odjakhuri. It is a meat and potato stew, sautéed with onions, and flavored with parsley and coriander. It is the definition of comfort food being as filling as it is appetizing. 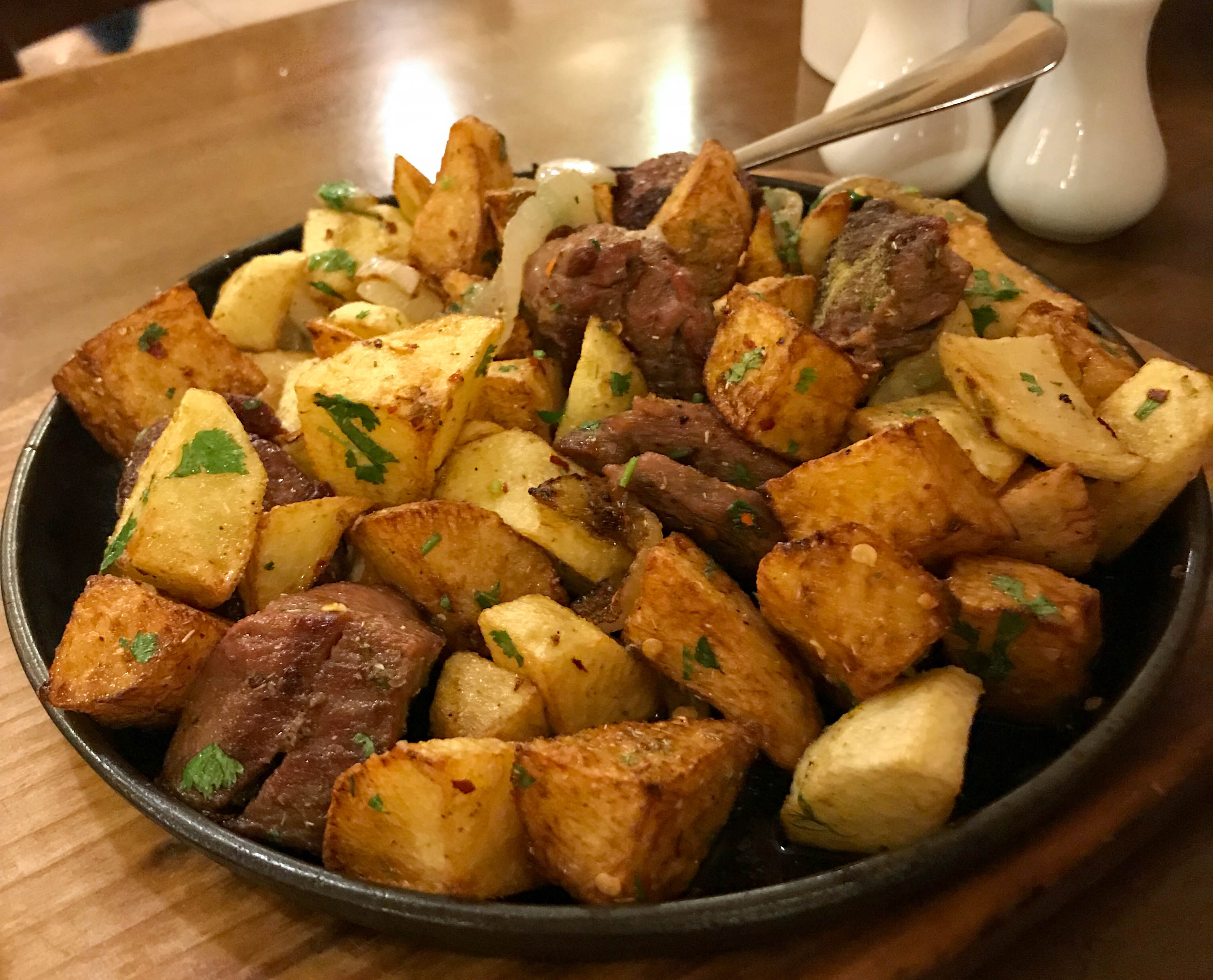 The summit of Georgian dishes is khinkali. These are dumplings, from the mountainous regions of Phsvi, Mtiuleti, and Khevsureti. They can be filled with meat, cheeses, potatoes, or onions. The filling is added before cooking so that it can have the chance to produce a broth due to the juices being trapped inside. Indeed, the proper way to eat them is to hold it up by the top, take a bite from the bottom, sucking the juices out, before devouring (except for the top) the rest of the dumpling. Khinkali must always be eaten by hand, as it is considered impolite to use a fork. 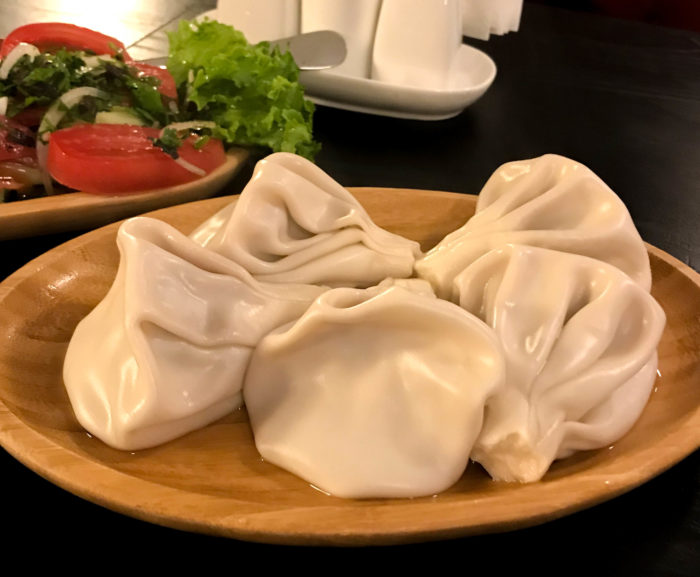 I would be amiss if I did not (only all too briefly) describe the wines of Georgia. Winemaking in the Caucasus stretches back to Paleolithic times, and it is even said that wine was first invented in the region. Most modern grape varieties can be traced back to ancient wild Caucasian grapes. Saperavi is the chief grape type employed, producing a red so deep that it is referred to as ‘black’ by the locals. The best wines are produced in giant clay pots referred to as kvevri which are then stored underground, allowing the wine to ferment.

It results in a heavy, full-bodied wine that is slowly drank, and induces drunkenness far quicker than the wines of the West. Indeed, drinking is the joy of the Georgians, and it is said among them that if one does not love wine, then it means that God does not love them. Saperavi wines are exported throughout the eastern parts of the world, from Moldova to Siberia. Moldovans have even tried to replicate Saperavi wines themselves, yet the resulting flavor is not the same.

My description of Georgian cuisine is by no means all encompassing, only reflecting the features and attributes that encountered there by myself. However, let it be seen as an introduction – a model for an adventurous chef. Hopefully, the reader will be inspired to discover more about the celebrated cuisine of the Georgians.