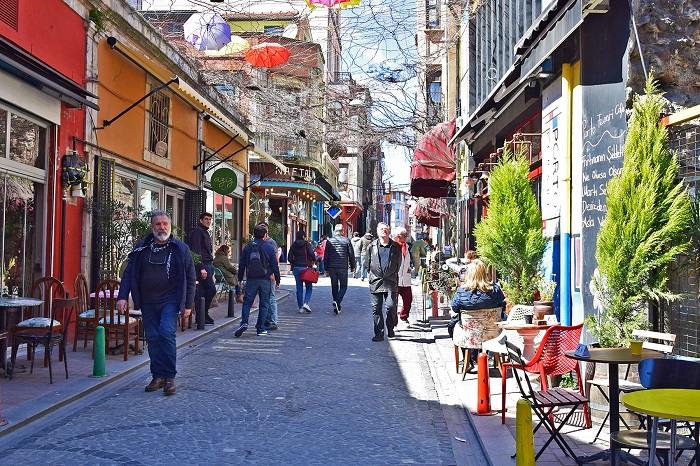 Located between the southern shores of Golden Horn and the ancient city walls of Constantinople lies the Fener (Greek – Φανάρι (Phanari)) Quarter. In the aftermath of the fall of the Roman Empire to the forces of Mehmet the Conqueror, the quarter became the center of life for Constantinople’s remaining Greek population. As this was an era before modern nationalistic discourse, perhaps it is more appropriate to refer to the population as the Turks did – Rum. The name, being a Turkish corruption of the name “Roman,” referred to the Rum Millet (literally – Roman nation) under which the Ottoman Empire referred to its Orthodox Christian citizens. It is a name that comes up often while walking the slopes of Fener, embedded within the bricked structures and within the historical soul of the quarter.

Despite the upheavals and demographic shifts that changed the character of Fener (and Istanbul as a whole) during the 1960s, the quarter still has a vibrant vibe that recalls the era of Phanariot wealth and political influence. Fener is home to tavernas where the ringing bells of Orthodox churches can still be heard, where the melody of the Greek language still fills the air, and where travelers can sip krasi or raki while enjoying a plate of fried saganaki. On the ground floor of the Hotel Troya Balat, one such taverna can be found – Barba Vasilis Rum Meyhanesi. It is here, where my trip to Fener began.

Learning about the Orthodox Patriarch at Barba Vasilis

Desiring to explore the remains of the Theodosian walls of the city, my path took me from the Grand Bazaar to an hour long walk along the Golden Horn. My weary feet welcomed lunch at Barba Vasilis, where I was pleased to make the acquaintance of the manager, Semiha, a Turkish woman for whom I could feel in her voice her pride and love for Fener. She spoke to me fondly of her trips to Greece and her appreciation for Greek culture. She spoke warmly of the Ecumenical Orthodox Patriarch, whose residence lies behind the restaurant, and how she has an autographed copy of one of his books. It was pleasant to listen to hear speaking so casually of Patriarch Bartholomaios, the spiritual leader of the world’s 300 million Orthodox Christians and the equal of the Pope in Rome, as a neighbor and as a personal friend with whom she often meets. She explained with a smile that it was not possible to visit the patriarch today as he did not show up at church to give the Divine Liturgy, but decided that he would be better off relaxing at home – taking the day off.

I wish to thank Semiha for the guidebook that she provided to me – detailing the historical sites of Fener and how to reach them. Taking my leave, I spent the afternoon exploring more of the neighborhood and taking a step back into the days of the Ottoman Empire – the days of wealthy Phanariotes who influenced the economic and political life of the Empire. Here, I wish to summarize some of the most interesting sites that can be found along the winding cobblestone streets of Fener.

Among Orthodox Christians, Fener is analogous to what the Vatican for the Latins. After the conquest of Constantinople, the patriarch’s authority grew and he was made responsible for the Rum Millet, being granted the title of pasha. Located on a street behind the Hotel Troya, the patriarch’s residence has been the center of Istanbul’s Orthodox Christian community for the past four centuries. The St. George Church is not all together ancient, only being built in 1836, and despite its unassuming appearance (compared to the Byzantine-era churches in the city) – its mosaics, iconostasis, and walnut patriarchal throne all date from the latter days of the Roman Empire. There are not many Greeks or Orthodox Christians still living in Turkey, but the church is very popular with pilgrims from nearby Greece.

Known in Turkish as the Özel Fener Rum Orthodoks Lisesi (Phanar Roman Orthodox Lyceum), this imposing red brick structure is known as the 5th largest castle in Europe. The present structure dates from the late nineteenth century, but the institution itself was established by Patriarch Gennadios Skolarios in 1454 as a school for Phanariotes and other Orthodox communities living in Constantinople. The prestigious institute produced many Ottoman viziers as well as several Wallachian and Moldovan families – namely Mavrocordatos, Ypsilanti, Morouzis, Suțu, Kallimaki, and Ghika. However, the most famous graduate of the school was Dimitrie Cantemir.

The current building was erected between 1881 and 1883 at an enormous cost by the Ottoman Greek banker Georgios Zariphis. Designed by the architect, Konstantinos Dimadis, the red brick structure was built in various eclectic styles and earned the nickname Kırmızı Mektep (Red School). It is believed that the bricks for the construction were brought over from France. There is an astronomy tower with a dome, built in a similar brick style, housing a large telescope for observatory purposes. The school still functions today – albeit on a small scale, providing a curriculum of courses in both Greek and Turkish.

The house of the eighteenth-century Moldovan diplomat, philosopher, geographer, linguist, musician, and of course – ruler can be found nearby. The brick palace is large and possesses a fascinating architectural style, but unfortunately the interior cannot be visited due to incomplete renovation works.

The courtyard is used as a café these days, where you can find families enjoying juices, soft drinks, and ice cream on warm days. There are also many colorful umbrellas, providing a more relaxing atmosphere.

St. Mary of the Mongols Church

This church is fascinating in the sense that it is the only Byzantine-era church in Istanbul to have never been converted to a mosque, and remaining an Orthodox Church. The church is small, and is surrounded by a wall, but stands out due to it brightly red painted exterior walls, gaining the Turkish moniker Kanlı Kilise (Bloody Church). There is also a legend that the church was the scene of a final desperate resistance against the Ottoman invaders in 1453.

The church dates from 1261 and was founded as a nunnery by Maria Palaiologina, the illegitimate daughter of Emperor Michael VIII and window of Abaqa, Khan of the Il-Khanate, who returned to Constantinople after an absence of 15 years. After the city’s fall, Mehmed II granted the church to the mother of Christodoulos, the Greek architecture who is famed for the construction of the Fatih mosque, in appreciation. There were attempts to convert the church to a mosque over centuries, but they were thwarted by the efforts of Cantemir, whose home is located within the church’s vicinity.

As mentioned, the church lies behind a wall and cannot be visited, unless the caretaker happens to be present. There are legends that the church possesses crypts and a tunnel that leads directly to Hagia Sophia, I did not have the opportunity to explore its veracity.

During the 1890s, nationalistic fervor was sweeping through the Balkans and Constantinople’s Bulgarian community expressed a desire to break away from the influence of the Greek Orthodox patriarchate. Sultan Abdulaziz was not inclined to allow the Bulgarians to have their church, acquiescing only if the church could be built within a month.

It took approximately a year and a half, but the Sveti Stefan church is one of the largest prefabricated churches in the world – being constructed from prefabricated iron elements (weighing over 500 tons) in Vienna, then being transported by sea to Constantinople. Undergoing extensive renovations in recent years, the church is an excellent example of the trend of producing prefabricated iron and steel churches during the nineteenth century.

A walk around Fener should be on the itinerary of every traveler to Istanbul. Despite the neighborhood’s multicultural history taking a turn for the worst during the 1960s, and most of its present-day populace being conservative Muslims, its cultural heritage remains paramount and is worth discovering further and preserving. Fener is a fascinating representation of the society that helped make the Ottoman Empire into a great power. For both Greeks and Romanians, Fener represents the concept of “Byzantium after Byzantium” where many of the wealthy Byzantine-origin Phanariot families influenced the development of Wallachia, Moldova, as well as the nascent Greek state.

The crumbling buildings, half hidden along the sloping and cobbled streets of Fener, tell stories and invite the traveler to take a step into Istanbul’s Ottoman past, before it fades away.

2 Replies to “Fener – A Walk Through the Phanariot Past”