To the west of Hațeg lies the ruins of the former Roman capital of Dacia – Ulpia Traiana Sarmizegetusa, founded by the emperor as a monument to his conquest of the Dacian country, and a symbol of Rome’s commitment to pacify and develop the region. It is well known to historians and travelers.

Approximately 10 miles north of Sarmizegetusa, in the village of Densuș, exists a most curious church. It is not only a rare example of medieval Orthodox architecture in Transylvania, it is also noteworthy due to its original base – appearing to have been constructed out of ancient Roman stonework and columns, perhaps dragged from Sarmizegetusa itself. The church appears to be a hodgepodge of Roman, early Romanesque, and high medieval Gothic styles smashed together over the centuries into a most curious mystery.

It is understood that a structure existed here as early as the second century, clearly connected to the Roman conquest of the area. There are arguments that the structure was originally a Roman or Dacian temple that was ultimately converted to a Christian church during late antiquity. Personally, I fail to find the logic in such arguments. The theory of the Dacian temple in particular appears to be rather implausible, considering that the great temples and fortresses of Dacian Sarmizegetusa can be found higher up in the mountains, only 30 miles away. The site’s construction on the flatlands of the Țara Hațegului, close to the gates of the Roman capital, clearly points towards a Roman origin for its construction.

The argument that the site was originally home to a Roman temple appears to be more credible. The northern face of the church’s walls remain colonnaded to our present day, providing hints towards the purpose of the original structure. On the roof, above the altar, two stone lions can be spotted, united by their tails. The church is all the more curious due to the fact that the altar is facing southwards and not towards the east, as in other early Christian churches.

Entering through a small stone door, the church’s interior is another tale itself. There is a stone tower, through which sunlight can enter the structure. The narthex is supported by four columns, which all four are re-purposed Roman funerary stele.

Some of them have been painted over with the images of Orthodox saints with gouged out eyes (curious in itself), but there were also a couple where the Latin inscriptions were still visible. They appear to describe the funerary tomb of a Roman general named Longinus.

Hero of the Dacian Wars

According to the writer Dio Cassius, Longinus was a Roman legionary commander in Trajan’s invasion force. In a scene that is also depicted on Trajan’s column, we learn how Decebal attempted to win the war. Concerned about Rome’s overwhelming military power and desiring peace, Decebal, the king of the Dacians, attempted to assassinate the Emperor of the Romans. Having failed, he then tricked  and captured Longinius, and attempted to extract from him the Roman military plans. After the general refused to betray his emperor, the Dacian king then used him to put pressure on Trajan. The story goes that the Dacian king offered the return of Longinus if the Romans would quit Dacia. The Emperor of the Romans refused, his resolve to destroy Dacia only strengthened further due to Decebal’s stratagems.

Dio Cassius continues, stating that Longinus decided to take matter into his own hands. Offering to return to the Romans to convince Trajan to give up the war, and writing a proposal towards that end, Decebal granted the general his release. Once he was free of his Dacian captors, Longinus drank poison that he had secured from a messenger and so ended his life. A formerly captured centurian would later tell Trajan the story of what occurred and soon afterwards the Dacians were defeated and the destruction of Sarmizegetusa Regia took place. It is said that in honor for his service, a mausoleum was constructed for Longinus, on the site of the Densuș church.

The mausoleum stood for ages, and may have been used for sacrifices to Mars. As antiquity entered its evening tide, the Romans would ultimately withdraw from Dacia and nearby Sarmizegetusa was abandoned. As with most ancient constructions, the structure probably collapsed (or was destroyed) at one point or another.

During the 7th century, curious local proto-Romanians, having forgotten the structure’s original purpose and unable to read the Latin inscriptions, rebuilt the structure as a crude church, in a Romanesque style and dedicated to St. Nicolae. The church’s final stage was achieved during the 14th century, when Gothic elements were added, and the murals were painted by the local master Ștefan. One of the most significant images shows a baby Jesus, wearing traditional Romanian clothing. 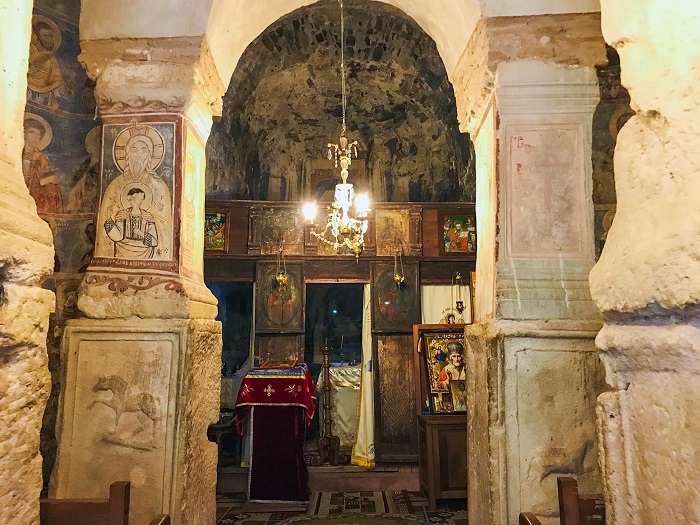 The Densuș church is remarkable from both an aesthetic and historical point of view. As Romania suffered the ravages of time and endless conquests, there is perhaps no better example of an artifact, literary work, or monument that does a better job of tying Romanians to their Daco-Roman origins. Indeed, we are lucky that the church still exists. During the nineteenth century, desiring to replace the church with a more modern and dogmatically Orthodox style design, local villagers very nearly succeeded in ordering its demolition. Understanding the church’s historical (if not its religious) significance, the Hungarian authorities prevented them from carrying out these plans, allowing it to survive until our present day.