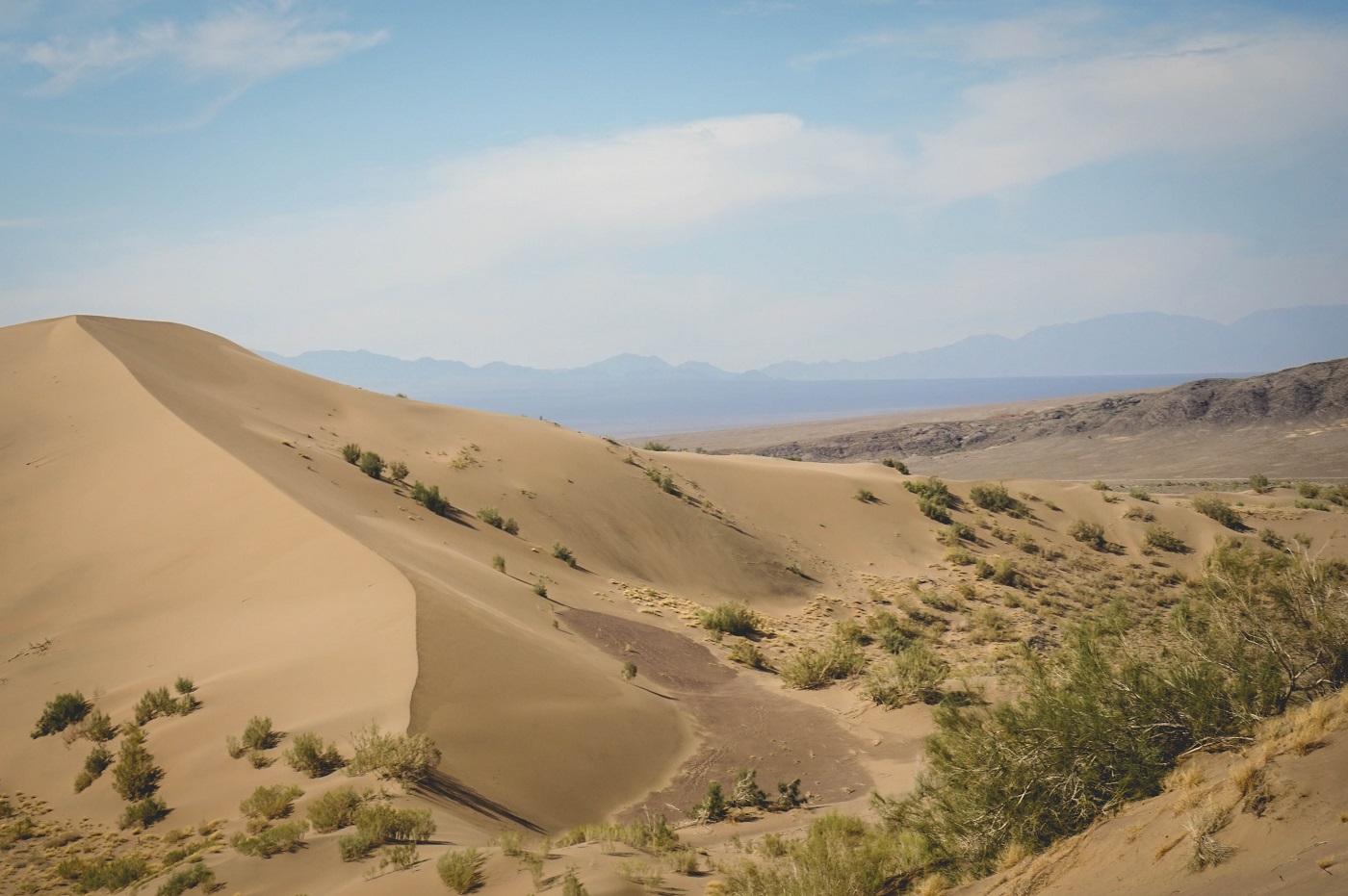 In the Kazakh language, the place-name Zhetysu means “seven rivers.” The name is a bit of a misnomer however, as there are only five rivers that still flow through the arid region south of Lake Balkhash, their names being – Ayaguz, Lepsy, Aksy, Karatal, and Ili. In the past, there were two additional rivers, whose names are not known to me, but they have since been lost.

During the time of the Russian empire, the region was called Semirechye, which translates to the same name of “seven rivers.” Historically, this region served as a meeting point between the nomadic cultures of the steppe, and the trading cities that made up the great Silk Road, and interaction between settled and nomadic cultures was intense. 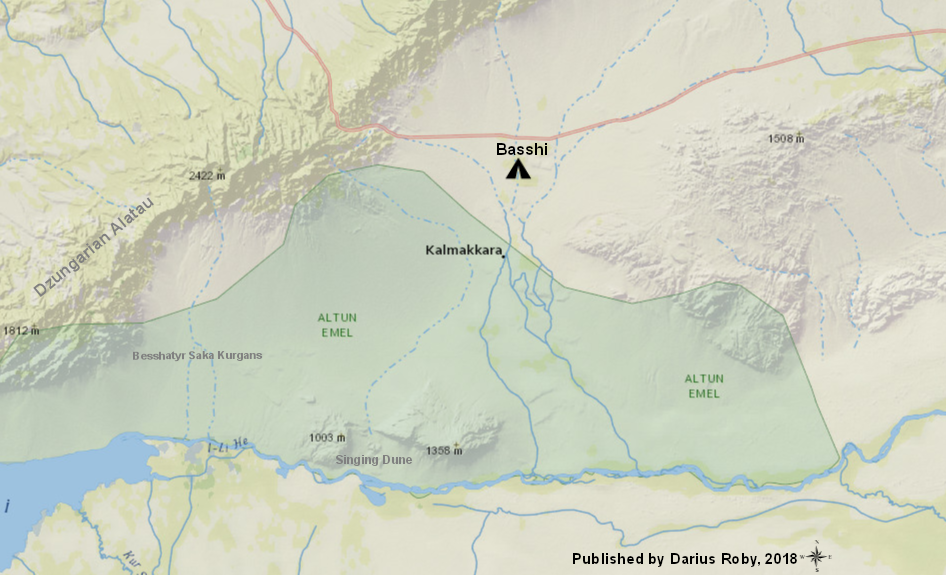 Indeed, it is true that in the ancient past, this land was the home of the Saka, a nomadic eastern Scythian culture that have left behind tumulus burials containing gold artifacts as well as the golden parade armor of a warrior, which has since become the symbol of Kazakhstan.

Indeed, it is said that the Saka culture was centered in Zhetysu itself, and the archaeological record testifies to that. Presently, the region is populated mostly by Kazakhs, Russians, and Uyghurs. The Russian language dominates in the city of Almaty, but one is more likely to hear Kazakh spoken in rural areas. The Kazakhs and Uyghurs are Muslims, while the Russians follow the Orthodox faith.

The Saryesik-Atyrau Desert – from the Saka to the Kazakhs

On a hot July morning, I left Almaty traveling north towards the Dzungarian Alatau mountains with my guide, Rabiga, and our driver, Azamt in order to explore an area of Zhetysu called the Saryesik-Atyrau Desert, a monochrome sandy steppe. The aforesaid mountains, forming a chain stretching southwest towards the Ili river are a wonder themselves. 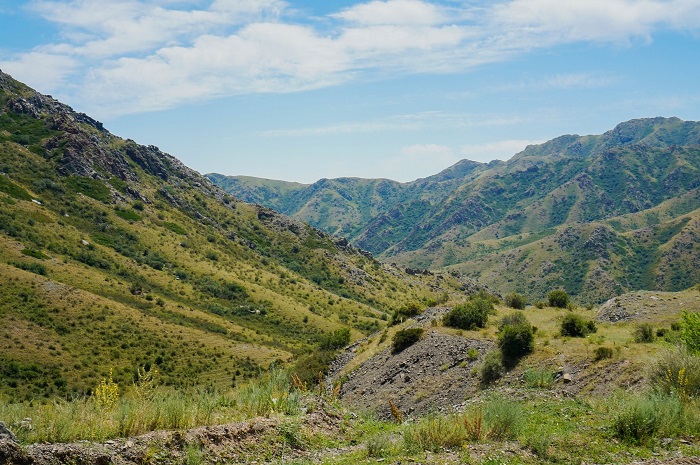 The verdant mountains of the Dzungarian Alatau are quite rocky, protruding over the landscape with rather sharp ridges. The chain of mountains achieves higher elevations (including some isolated snow-capped peaks) in some areas, while at the border with China lies the Dzungarian Gate, a mountain pass that effectively separates Central Asia from East Asia. It was through this pass that nomadic invaders would sweep across Asia, ultimately reaching Europe. As we traveled the mountains, I watched the sun continue to rise over the eastern regions of the world, beckoning us towards the desert steppe that lies beyond. 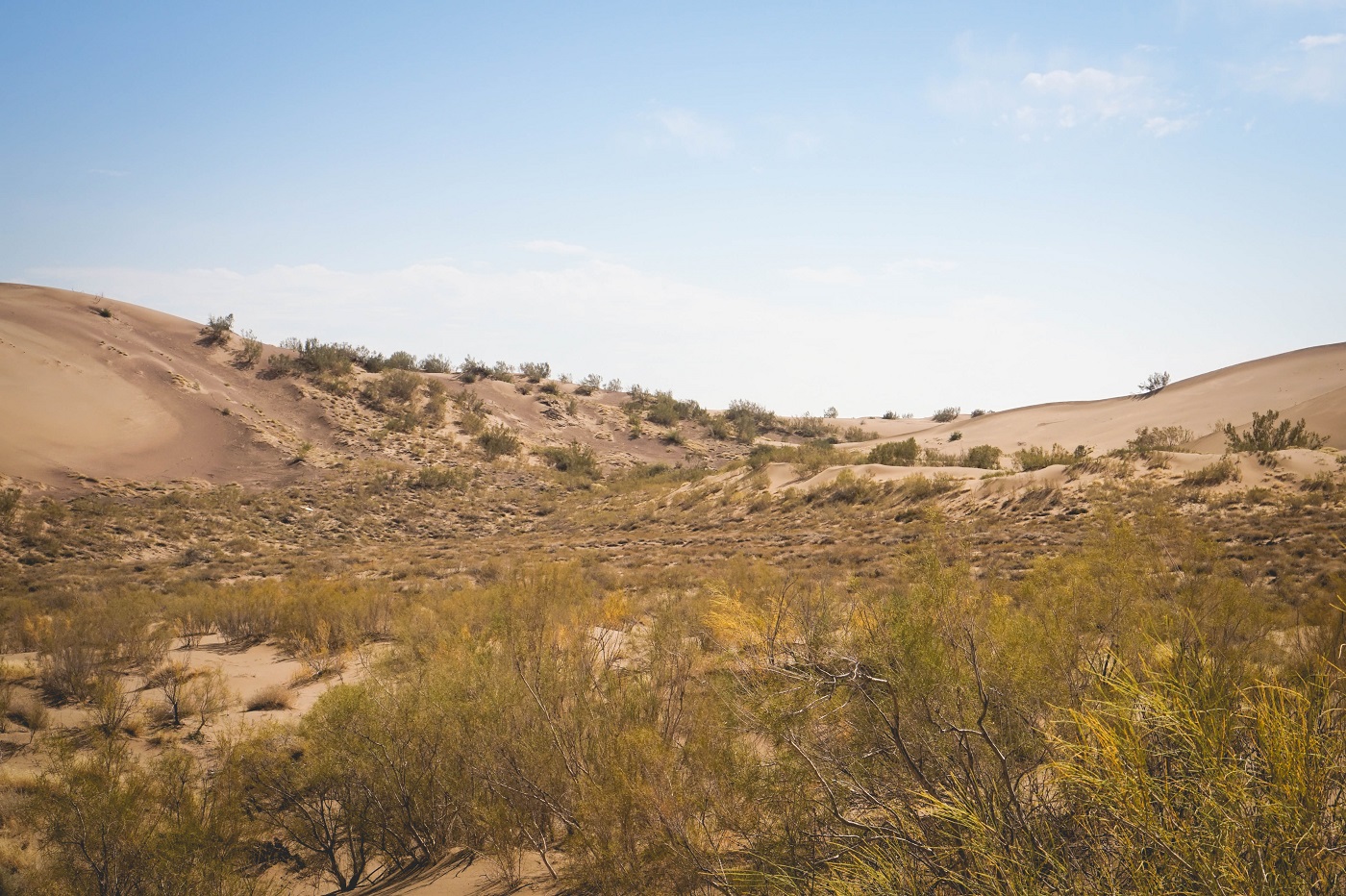 The Saryesik-Atyrau Desert is rather peculiar, being full of geological and historical oddities. It stretches over 250 miles from Lake Balkhash in the north to the Ili river in the south, also bordered by the aforementioned mountains to the west. It is sandy for the most part, with bits and pieces of scrub-like vegetation eking out an existence under the merciless and scorching steppe sun. There are random lakes, ponds, and springs that can surprise a weary traveler, but these travelers are far and few in between.

Indeed, Kazakhstan strikes me as being so empty that it is difficult to imagine from where came the multitudes of mounted warriors who once troubled the great civilizations of Rome and China. Indeed, between Basshi, the entrance to the Altyn Emel National Park, and the ranger station near the singing dunes, we did not encounter any other sign of human settlement for another two hours, only endless desert steppe. 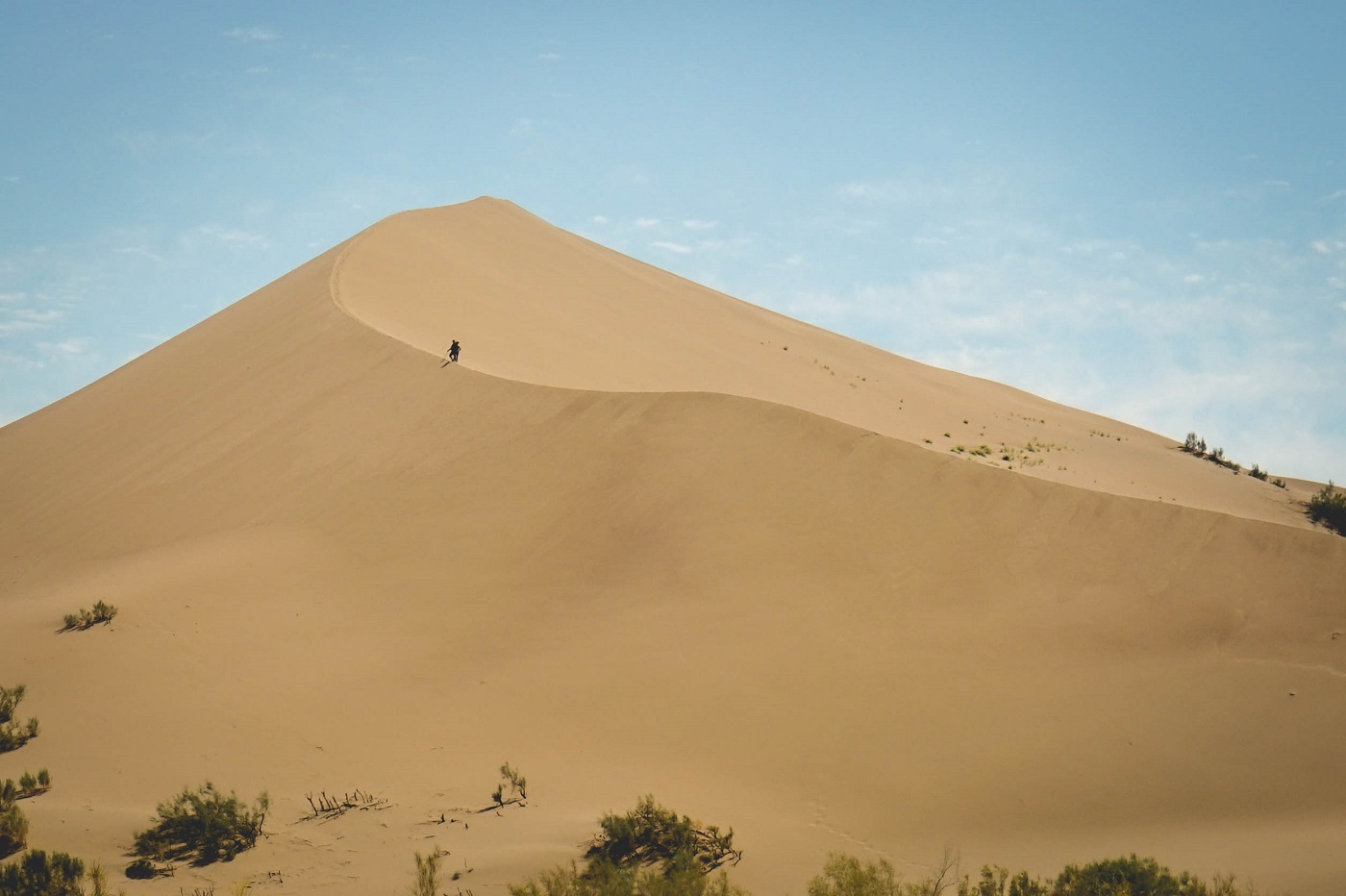 A hike over the desert steppe

After a couple of hours of traveling over the endless steppe, I spotted large sand dunes in the distance. We had arrived at the famous Singing Sand Dunes of Altyn Emel. They are large dunes formed thousands of years ago by sand deposits blowing from the nearby Ili River, reaching a height of nearly 500 feet. It is possible to reach the summit by climbing the light-colored sand along a narrow ridge.

The climb gives the impression of being perilous but the sand is so thin and soft that each step easily left me trudging knee deep. In any regard, were one to fall from the dune, one would probably land comfortably in the soft sand below. The dunes are not only famous for being photogenically beautiful, but also for their singing characteristics. 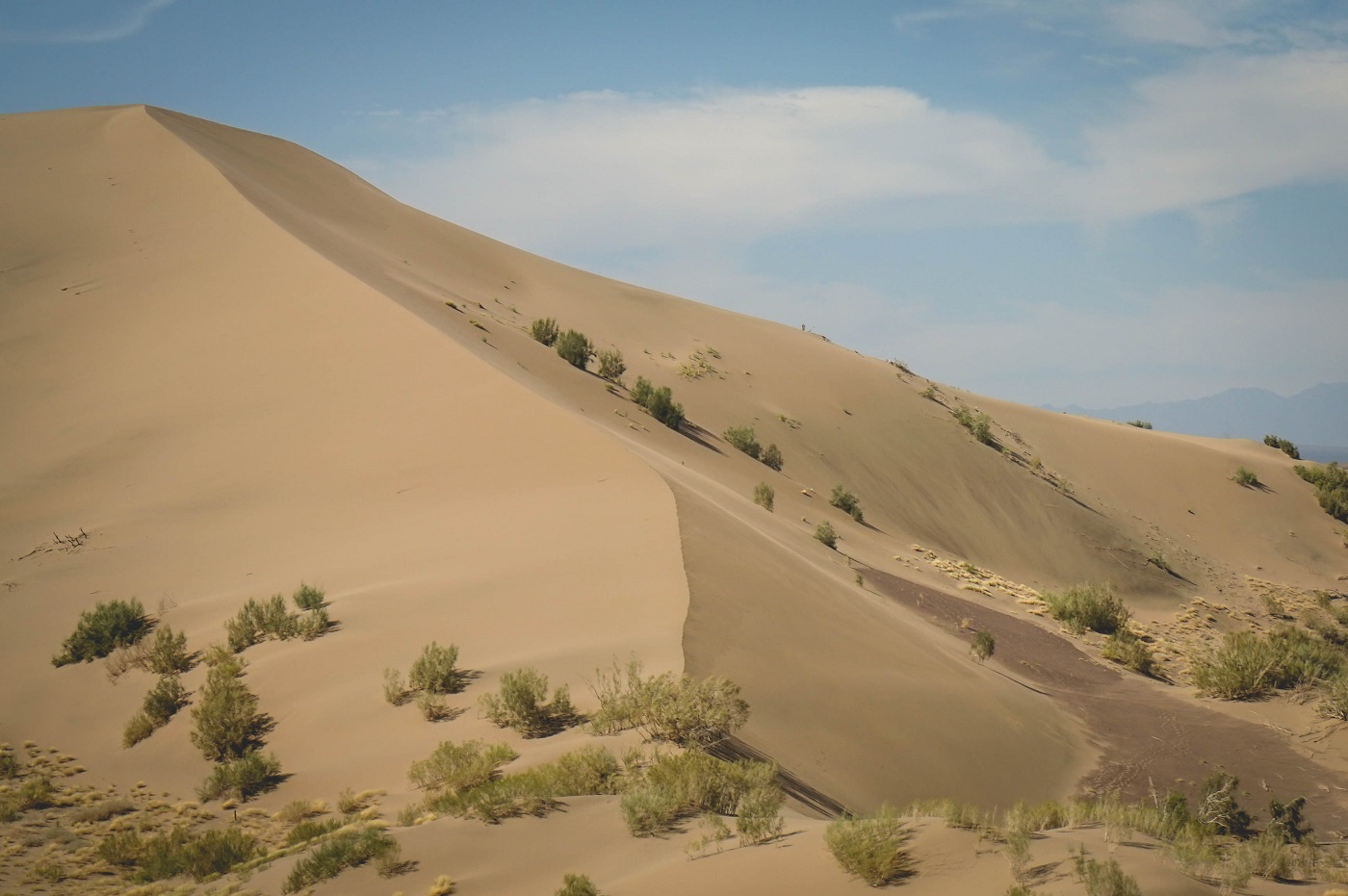 Rabiga told me that should one reach the summit and then run down at a great pace, it would be possible to hear the dunes singing of the exploits of Genghis Khan. However, I found that one simply needs to place his ears low to the ground to hear the sand whispering the tales of this largely unexplored land. The dunes stretch for a few miles, and we continued hiking through the desert, exploring the barren paths and avoiding the sharp vegetation. 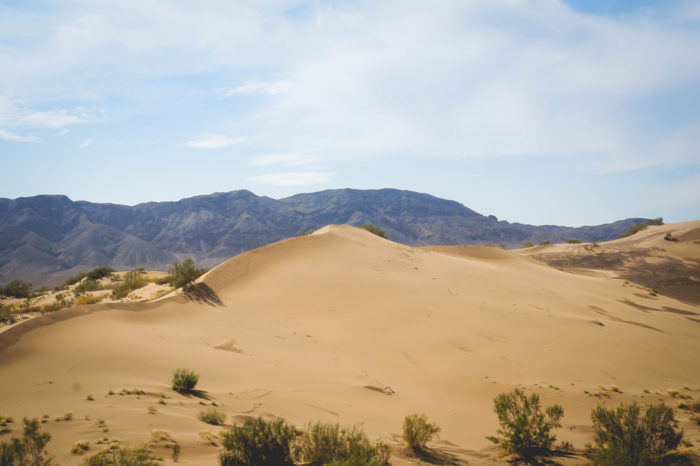 We saw tracks and other evidence of animals native to Central Asia, such as lizards, snakes, antelopes, and perhaps even the extremely rare Przewalski’s horse. It is clear that this area is teeming with wildlife during the morning and evening, when the sun’s glare is not so powerful.

Continuing, we eventually climbed a ridge and over it, we saw the desert give way to the silver ribbon of the Ili River, quietly continuing its course from Xinjiang towards Lake Balkhash. There underneath a tree we found respite from the scorching sun, admiring the view below and losing ourselves in conversation about Kazakh culture and the wealth of geographical beauty that the country has been blessed with. 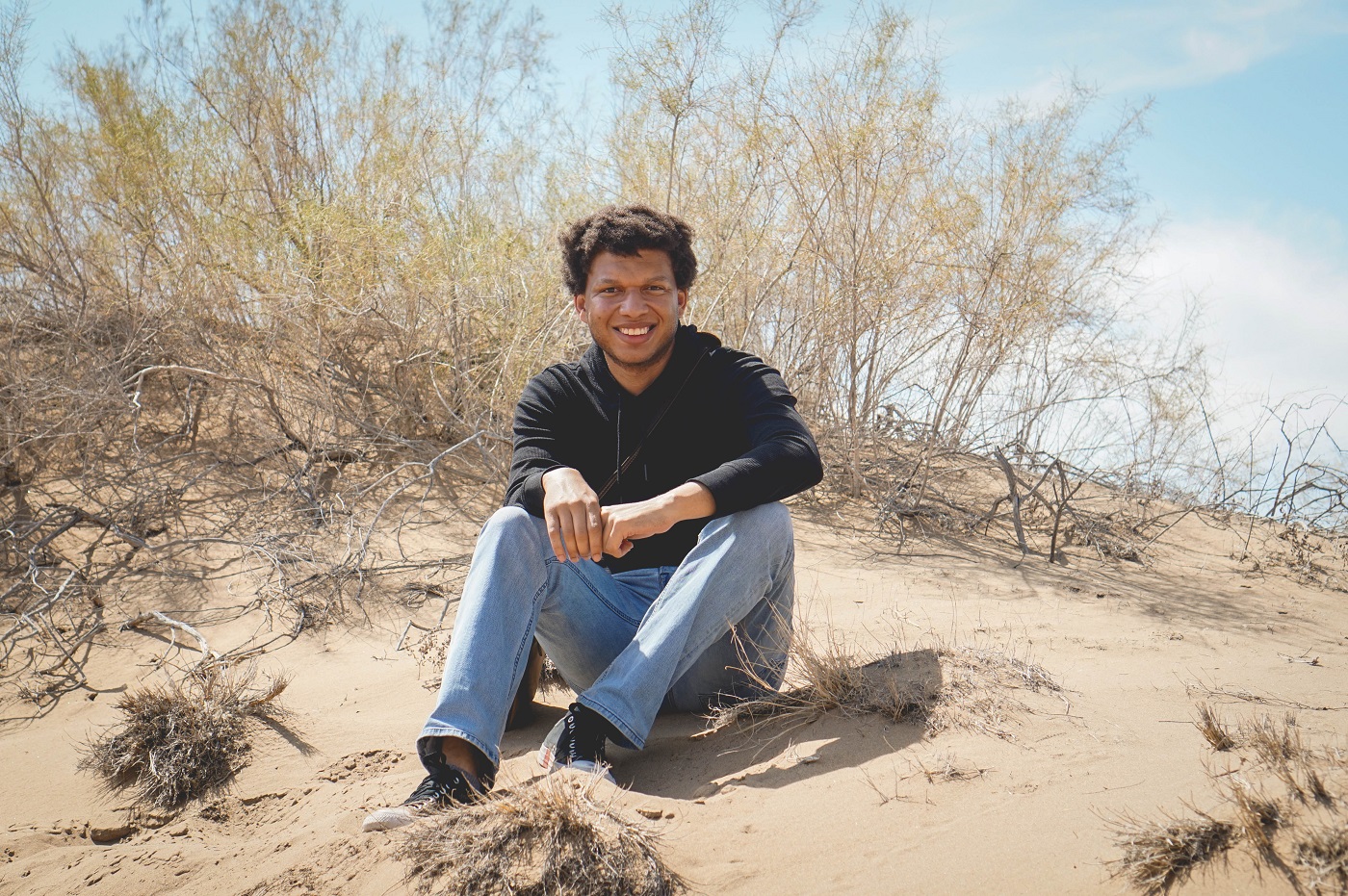 Making our way back, we again traveled over the monotonous desert steppe until we again reached the green mountains of the Dzungarian Alatau. There, we stopped at a yurt and were greeted by a Kazakh family who demonstrated to me the famous hospitality of Central Asia. They dressed me in Kazakh robes, bade me enter the spacious interior of their yurt and offered me baursaki and kumys, the famous fermented mare’s milk that Herodotos once described the Scythians drinking. 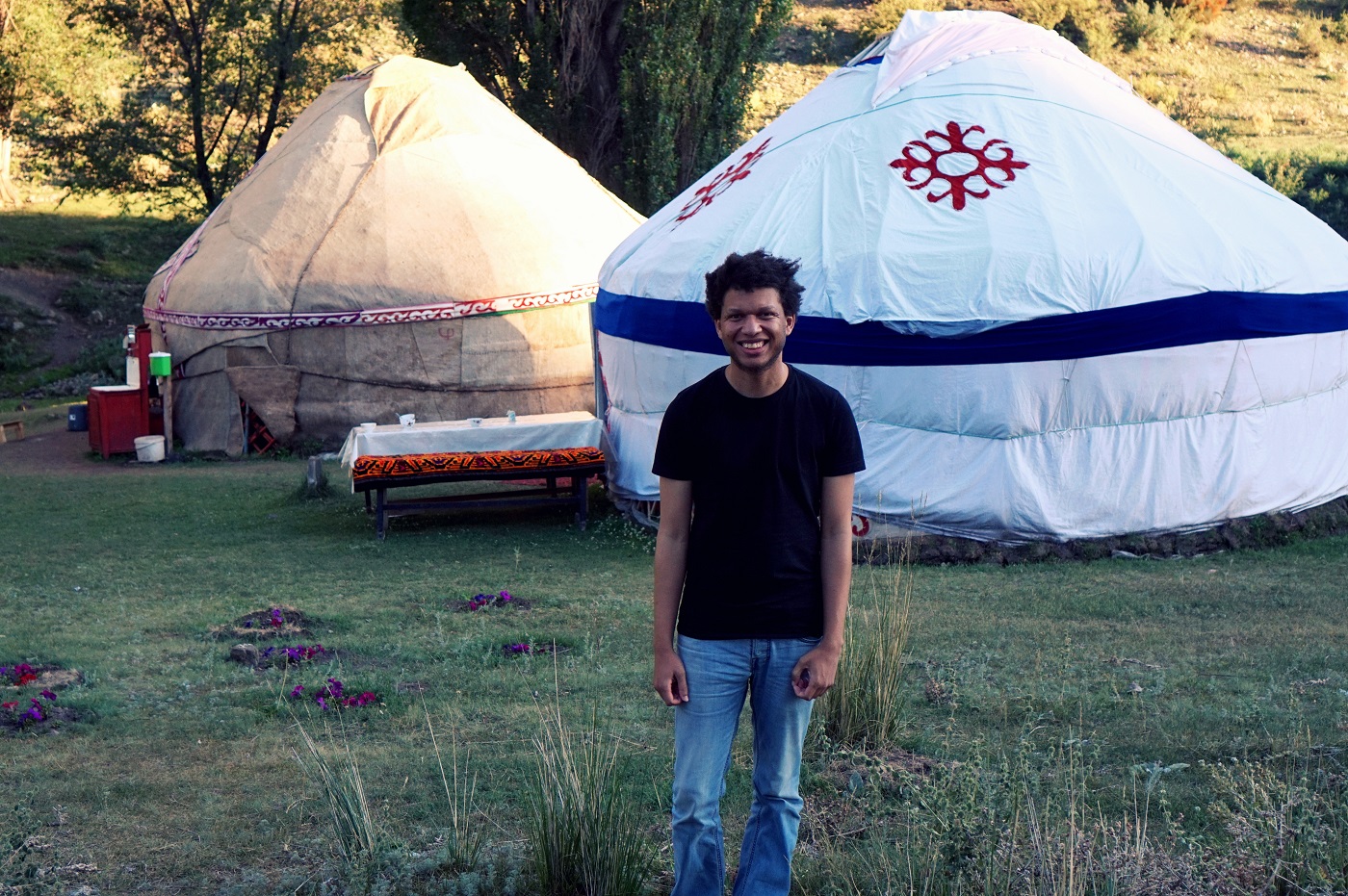 The taste was quite rich, and surprisingly good, being served cold and slightly fermented (having a stronger alcoholic content than kvas, but a bit less than a light beer), I felt quite refreshed after the day’s trip. 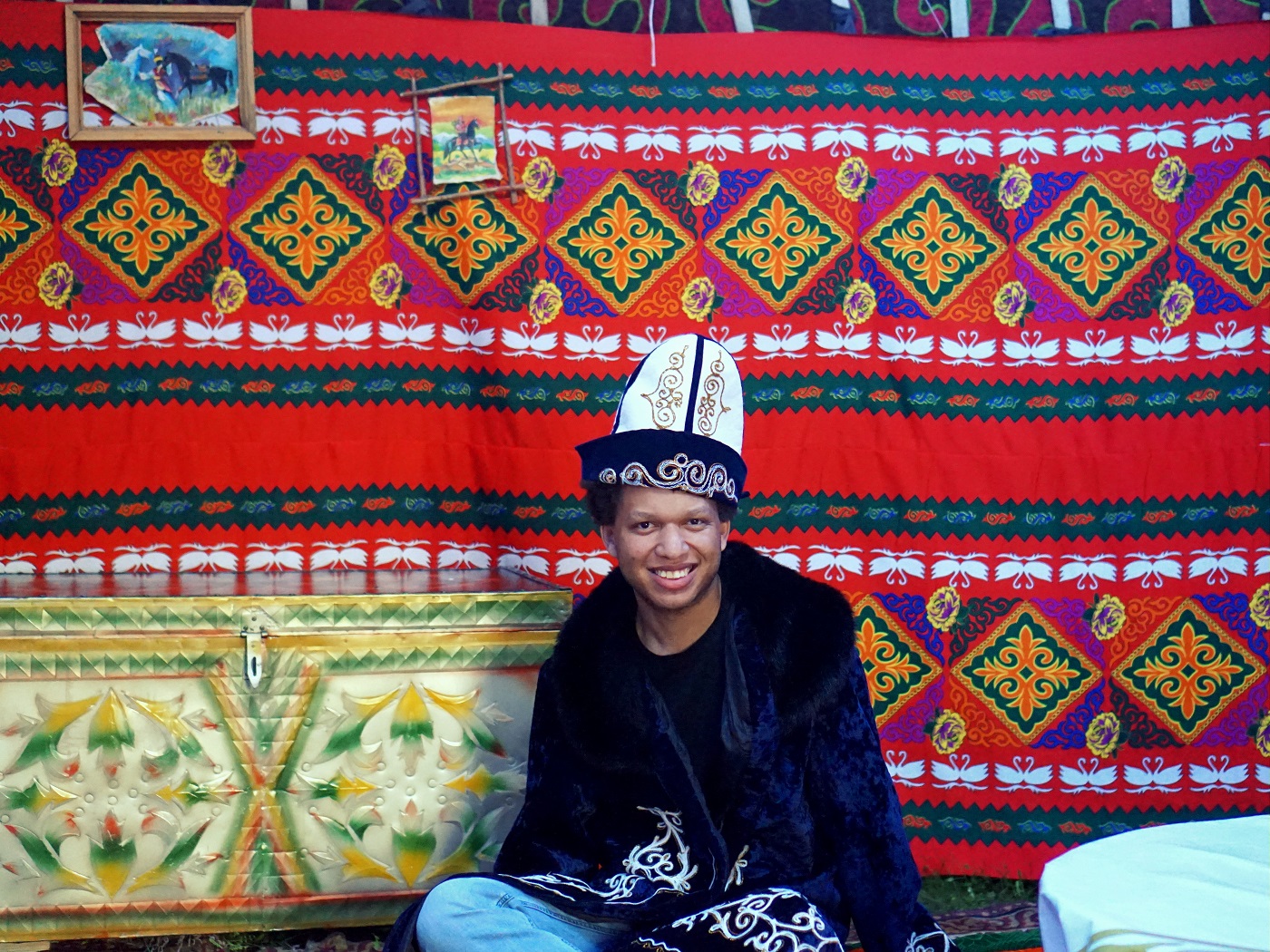 My hosts asked me about life in America, and in my bad Russian – I answered their questions, conveyed my gratitude for their hospitality, and remarked about how close I feel towards Kazakhstan, its nature, and culture. Eventually, Rabiga, Azamat, and I bade our hosts farewell and we set off again towards the sun setting west beyond the mountains, the road continuing on.