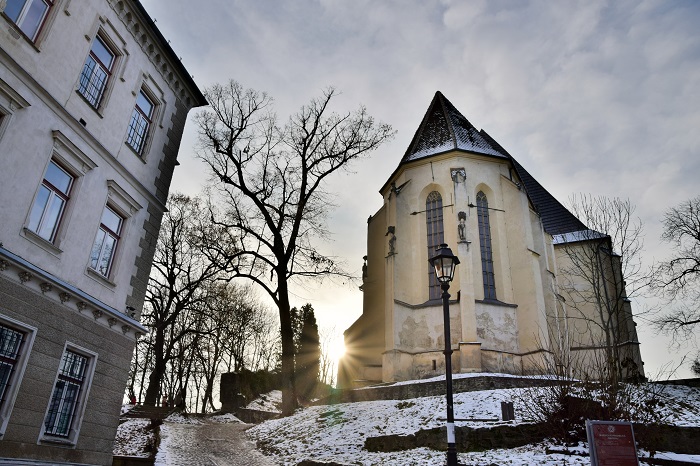 Along the Târnava Mare River valley, Sighișoara, known as Schäsbrich in the local Transylvanian Saxon dialect, is perhaps the best preserved medieval town in Transylvania. The town was originally settled by German-speaking settlers during the 12th century, who were invited to defend the Kingdom of Hungary from Mongol raiders. It is surrounded by walls and towers inside which can be found a mosaic of pastel colored homes. Near Sighișoara’s main square, there is a covered staircase whose 176 steps leads to the town’s acropolis – crowned by the Schäßburger Bergkirche. The Bergkirche is Sighișoara’s Church upon the Hill, a historic monument highlighting the story of the town’s Saxon population and Protestant faith.

The Church upon the Hill

The Evangelical church is the largest monument of Sighișoara and can be seen from any point of the town. Noteably, the area around the church commands a wide view of the Târnava Mare river. The Bergkirche shows evidence of having been built in various stages – an earlier Romanesque construction ultimately being converted to a more Gothic style a century later. Beyond this, the church’s exterior is rather unremarkable, as defense, rather than architectural beauty, was taken into far greater consideration.

Upon entering the church, the walls are lines with the remnants of sarcophagi and funeral stelae, dating from throughout the Bergkirche’s history. Furthermore, there are also altarpieces which have an interesting history. During the latter half of the twentieth century, when the fate of Transylvania’s Saxons population saw them repatriated to Germany, many of the churches throughout the area fell into disuse and were looted by the locals. Eventually, some of the pieces were recovered and the decision was made to have them better cared for and protected in Sighișoara’s Bergkirche. They attest to the rich artistic history of Southern Transylvania.

In the past, the Bergkirche was once completely covered with richly painted frescoes. Indeed, the Berkirche was once served a catholic community, but over time the church was converted to a Lutheran one, and the frescoes were whitewashed during the sixteenth century. The murals were partially restored during the early twentieth century, and what has been uncovered provides some of the most impressive examples of medieval and Renaissance art in Transylvania.

Most of the frescoes date from the fifteenth century, but some examples date as early as 1300. It is understood that they were authored by Valentinus Pictor and Jakobus Kendlinger. One of Kendlinger’s examples is an interesting portrayal of Saint George on horseback, engaged in battle with a winged dragon. To the left of George is a princess who is watching the fight.

Lying beneath the choir, a small flight of stairs leads downstairs to an interesting crypt. As it was constructed in a Romanesque style, the crypt is clearly as old as the church itself. It is built of stone masonry that gives it a cold and damp feel. The burial chamber has a central aisle with rows of coffin niches on each side. The vast majority of the niches are covered with masonry, but there are a few in which the coffins of leading Sighișoara’s citizens, largely priests and other officials, can still be seen. Unfortunately, the crypt has been targeted by thieves in the past, in search of valuables in the tombs. This has led to extensive damage having been done to the tombs.

Beyond the burial chambers, there is a small atrium with windows on three sides, where the light of the sun can enter and provide light to the dead. The Bergkirche’s crypt is notable in the fact that it is the only such example that can be found in a Transylvanian church.

Outside the church, along a winding and misty path lies the church’s cemetery. Most of the names on the tombstone are mostly of German origin, revealing a tight knit community of Saxons. It is hauntingly beautiful, its ivy-covered graves hiding a multitude of stories and secrets. The cemetery clearly has a strong Protestant feel, as the work ethic of the population is hinted at through the burials. Many of the tombstones list the occupations (carpenter, ropemaker, tailor, etc) of those buried.

Near the cemetery’s entrance is a strange tower, that appears to have been heavily modified since its initial construction. This is the Tower of the Ropemakers, whose responsibility once involved defending this area of town from foreign invaders. As the story goes, as the era of foreign invasions ceased in Transylvania and the need for the defensive structures diminished, the tower was given to a poor family. In exchange, the family was required to ring the bell at 7 in the morning, at noon, and finally again at 7 pm, each and every day. Furthermore, the family was required to maintain the area and to keep it clean.

It must be noted that the cemetery and the church are barely in use today, mostly reserved for special occasions and celebrations. For the most part, the locals participate in services in the former monastery near Sighișoara’s city hall. There is also a school near the Bergkirche, hinting that while the town has experienced better days, life still continues here, albeit at a slower pace and a smaller scale.