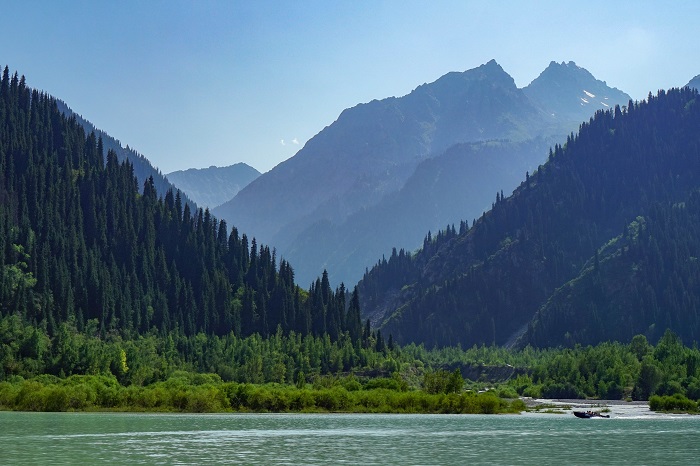 Compared to the steppes and deserts to the north, the southern provinces of Kazakhstan are walled off to the south by the towering peaks of the Tian Shan mountains, separating it from neighboring Kyrgyzstan. The majestic range is home to the tallest mountains that I have ever seen, with peaks towering well over 16,000 feet in places, snow-capped even in high summer. It is in these mountains that the elusive and endangered snow leopard, one of the national symbols of Kazakhstan, can be found. Its importance is such that the creature featured prominently on the seal of the city of Almaty. From there, the mountains are easily visible, serving as a directional reference point for city dwellers.

While in Almaty, I sought to explore parts of this area. With my guide, Rabiga, we set off east on a hot July morning along the road towards the mountains. We were not unique in our endeavor, as there were many cars going in the same direction. Prepared for a hike and picnic at Issyk Lake, we were well stocked with beer and other foodstuffs. I inquired if this is the road that leads to China. My experienced guide affirmed in her soft Kazakh accent, explaining that it takes approximately eight hours to reach the Chinese border from Almaty along this road. Unearthing beers from her bag, she told me of her travels to Chundja, the border region to the east where the Uyghur people live, and about their particular dishes and culture. Initially, I felt rather weird at the thought of drinking while in a moving car. Such a concept is unimaginable in America, and I am fairly sure that it is illegal even in Romania, but on a hot summer day in Kazakhstan – why not? За друзей! we both toasted to the clang of glass bottles.

No visit to Issyk Lake is complete without first stopping at the archaeological museum near the town of Issyk. For fans of Eurasian nomadic cultures, this place is Mekkah. My eyes widened as I beheld the complex of over 80 burial mounds (kurgans) attributed to the Saka, the eastern branch of the Scythian people. There were exhibits displaying the interior structure of the Saka burial mounds, as well as armor (including for horses), weapons, and jewelry.

I also beheld a replica of the Golden Warrior (the original is displayed in Astana), another important symbol of Kazakhstan, that was discovered in the region. I stood mesmerized, staring at the golden parade armor of a Saka noble (perhaps even a king!). The hat appeared to be similar to a medieval hennin, with a red base overlaid with golden jewelry. Rabiga, noticing how captivated I was by the exhibits, promised that she would show me a very special kurgan later that day.

A Day Trip at Issyk Lake

Taking our leave of the museum, we passed through the town of Issyk proper, and took a road leading into the wooded mountains. As the road climbed, we were greeted with spectacular views of deep valleys and sharp peaks. Eventually we reached one of the jewels of the northern Tian Shan Mountains – Lake Issyk (also Esik).

The lake is another one of the geological oddities that make Kazakhstan a special place. It was originally formed millennia ago, a result of landsides damming off the Issyk River, creating a natural lake. The place is popular among families from Almaty who visit for weekend picnics, barbecues, and swims. It is probably best to visit between May and August, as I imagine that the water would be too cold for swimming during other times of the year. Perhaps the waters are sufficiently cold even in July, as I observed a staggering man curing his drunkenness by falling into the chilly water, emerging with a sober smile on his face. The inviting aroma of shashlik (lamb skewers), noodles, and oriental sauces gave away the presences of families, happily chatting among each another in Russian, enjoying a Sunday afternoon away from the chaos of the city. Along the shore, I noticed a blonde Russian girl serenely picking brightly colored flowers – making a crown of them to wear in her hair.

While watching the scenes of serenity unfold, I was approached by a rather drunken man, a Kazakh, who smiled, inquiring as to my name and from where did I arrive. “My name is Darius, and I’m American” I politely responded in Russian. Whether it was because of my American accent or the fact that the name Darius simply does not exist in the cultures of Central Asia, he did not seem to understand and again repeated his question. Bemused, I ultimately blurted out that he could call me Dasha. (Dasha is the diminutive for Darya, a common name in Russia and Central Asia). Everyone laughed, and satisfied with my response – we toasted a beer under the shaded shores of Issyk Lake.

It should be noted that a mudslide originating from the Zharsay River destroyed the lake during the 1960s, killing quite a few people. There is a memorial close to the lake honoring the deceased. The lake would not be restored until the 1990s.

Issyk Kurgan and the Golden Warrior

After hours of merrymaking, picnicking, and drinking, we again set out for our next stop. Again, passing through Issyk and then east past the towns of Koktebe and Turgen, Rabiga asked our driver to stop near a small road leading towards a mountain. Facing us was a large statue of a tall Saka warrior, standing next to the smaller statue of a snow leopard. Before both statues was a small burial mound and a tree that was covered in colored ribbons, offerings to the warrior’s memory.

It appeared that Tengrism, the original religion of the steppe nomads, was alive and well at this place. Rabiga explained that this is where the Golden Warrior was originally found by archaeologists during the 1960s. Mesmerized, I stepped inside the dark and hollow interior, imagining that the warrior had spent nearly two millennia sleeping here. The unknown warrior’s importance to the country should not be underestimated. A similar statue stands in the center of Almaty, the Golden Warrior being an inspiration for Kazakhstan’s independence, and pride in its history.

Wiping the sweat off my brow and lying in the grass next to the kurgan, I mused over the day’s travels. This region obviously had a strong historical significance – being the site of so many rich Saka burials alongside Almaty’s role in the ancient Silk Road, connecting Eurasia both East and West. The region is rich in cultural, geographic, and historical sites and I have only just glazed the surface.

Perhaps another day I will return to Kazakhstan – to meet old friends, to get to better know its mountains and deserts, and to continue exploring and discovering the history and culture of the region. To that promise, I found a small ribbon in my backpack, and making my way to the tree, I tied it there, feeling the mountain wind blowing in my hair, ready to welcome me back.